Looking at compositions of natural objects I focused on an “autumnal grouping” of a log/ pine cone/ ivy and mushrooms.  I was not keen on the log as it was very difficult to give it form without it just becoming a lot of squiggles.  So I changed it for a large pine cone.  I felt the layouts were more contrived than the lego and ironically did not achieve the same sense of randomness.  I was not so keen on the more contrived groupings.

However, the fact I did not have to be so accurate meant I could be freer, creating organic shapes rather than exact machine tooled shapes. 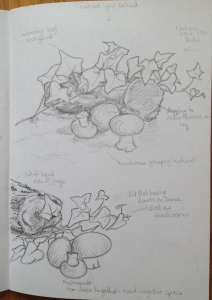 I had a go at a final drawing using Dip pen and indian ink on A2 mixed media 250gsm paper.  I liked using the pen but was aware I wanted/needed to loosen up, which I found hard to do.  However, I was not keen on the finished picture.  I felt it was flat and uninteresting, especially from closer up and from a distance it looked a little like a henna tattoo- lots of thick lines!  I suppose part of the problem is the fact it has no background and maybe I should have tried to add one.  However, I was put off by the unpredictable nature of the pen and thought adding background detail might just look even more messy and confusing to the eye.  I also struggled to create shades of grey through shading so the final picture looks flatter than I wanted. I feel it is more pattern than form- a little like a stencil 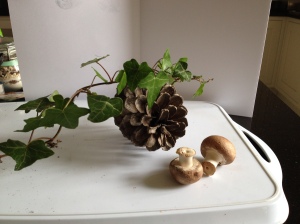 I went a bit mad in search of colours and used almost everything in my “pencil arsenal”!  I was aiming for a grey tone understated colour finish and didn’t want to use bright unnaturally intense colours. (I felt that aiming at some realism restricted my colour palette)  I enjoyed building layers of colour to create form and texture.  I felt that the cone worked well and also the mushrooms which needed paper to show through to create roundness of shape and highlights.  The final colour spectrum used worked well on the whole.  The area I was lessee pleased with was the ivy- the leaves became a bit over-worked and as a result in places the leaves look a bit flat and lacking in contrast of shading.  If I were to do this again I might add more background to place the objects in context.  However, I am pleased with the way the shadow grounds the objects on a surface without being too dark and competing with the detail on the objects themselves. 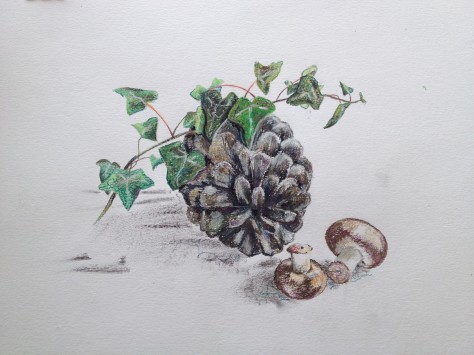 Review your work for the last two exercises and make notes on the following:

I decided to use Lego to investigate compositional sketches of  man-made objects.  I was interested in the repetitive nature of the bricks and in the light and shadow and negative space around them.  I had envisaged creating piles of bricks but in the event it wasn’t very practical as the bricks would not stay piled up and kept slipping off.  I felt that whatever arrangement I made with them they always looked natural- as if a child had left them randomly arranged after playing with them 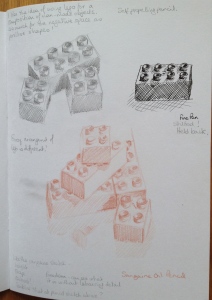 I used colour pencils for my final A4 sketchbook sketch, which turned into a fairly detailed drawing. I liked the use of colours, layering different colours on top of each other, creating the smooth texture, form and shadow on and between each brick. I added some vibrancy with contrasting colours at the end which I really enjoyed (particularly purples, blues and greens in the shadows) 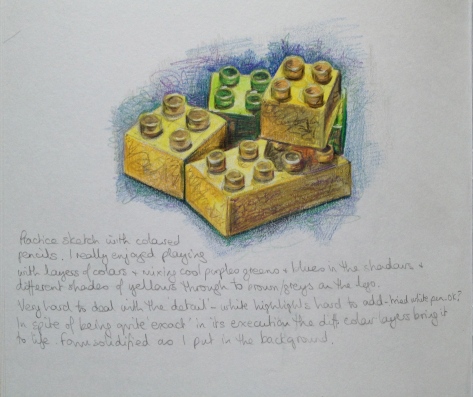 For my “final” sketch of lego I used oil pastels on A4 cartridge paper, thinking I could do the same as the colour pencil sketch but looser.  I probably did the picture too small- in spite of the crayons being thicker and clumsier I still drew the picture on A4! I didn’t like the finish and felt that instead of being looser it became messier (and annoying).  However, I liked the colours and layering similarly to the colour pencil drawing.  In both cases the colourful plastic finish of the brick encouraged the use of bold, bright, fun colours.  I deliberately chose to use bricks of one colour (with the addition of one lime green one for the pencil drawing above) as I liked the repetitive nature of the picture, allowing the eye to linger on shape, shadows and texture rather than confusing the simplicity of the image with different colour bricks.

Ink and acrylic on A2 cartridge paper:  I was interested in researching the work of Patrick Caulfield.  https://twatmough.wordpress.com/category/research-reflection/research-part-2/   I thought it would be interesting to exaggerate the intensity of light and shade on the lego bricks to see if the final image had form or looked flat?  I spent some time trying to find an intense background colour to contrast the black image.  In spite of removing as much detail as possible the final picture still had a sense of 3D form, as if white bricks were under an intensely strong light.